I usually only write blogs about positive things. I try to keep it upbeat and in the words of my old pal Gandhi*, ‘Be the change you/I want to see in the world’.

Now, I have no idea if this conversation is real or who it’s between but, I recognise it. Every word.

I’ll unpack it for you just so we’re clear.
+ Someone want’s their friend to support them at a show. They’re starting to get somewhere in their career and they want their friends to come along and get on board.  + The ‘friend’ doesn’t reply.
+  A few months pass and they invite the friend to another show.
+ Again no reply.
+ Another few months pass by and the performer has some merchandise. Their friend is always too busy to reply about attending shows, so maybe they could show their support by picking up a shirt?
+ Again, no reply.
+ A year passes and the performer has made it big. Big enough to be noticed by his old friends at least. They’re playing at a festival and their friend suddenly wants to ‘come support them’ and wonders if they can get some free tickets for the festival.
+ When the performer doesn’t reply, suddenly they ‘forgot where they came from’ and they’re ‘a snob’. 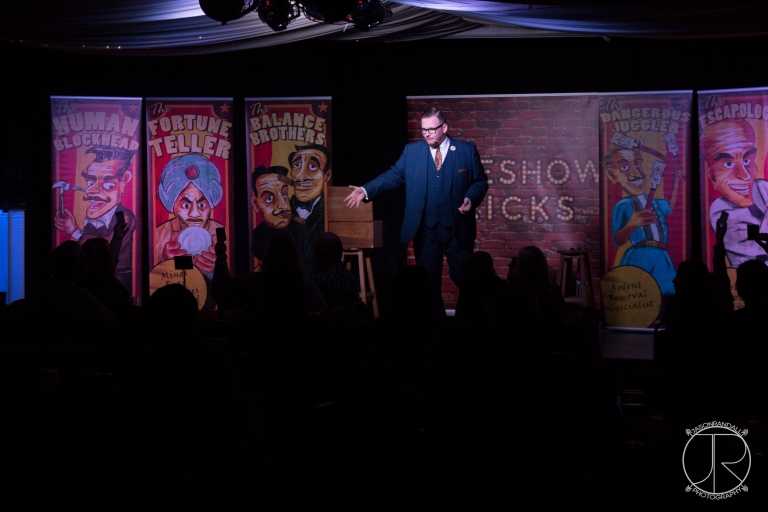 This caused me to reflect on the support I’ve had on my own projects. For the past two years I’ve been touring a full evening theatre show called ‘Sideshow Tricks’. It’s also been resident at Viva in Blackpool.

I decided to ask for some details on the free tickets I gave away. It turns out that around 30% of the tickets I gave out free didn’t get claimed. Everyone of these tickets was either –
A) directly asked for or –
B) offered by me after receiving a message that said something like ‘hey buddy! We want to come and see your show this year. Looking at ‘insert date here’ specifically. Where can we get tickets?

In the case of ‘B’ if I don’t really know the person well or they aren’t a fellow performer, I’ll usually just send over the ticket website and say ‘hope to see you there’. If we’re real friends (not just in a social media sense) or they are a fellow performer (there’s kind of a code/brotherhood) I’ll often ask how many they need and tell them that the tickets are on me. They express delight, surprise and thanks and tell me that they’ll be there!

That’s an average over a couple of years. Some nights they all do. Some nights, none. What’s incredible to me is that people with free tickets have the worst luck. Their pets and children are ill. Their cars break down. They get stuck at work. They simply forget they were coming or their grandparents forget they were supposed to be babysitting.

I feel guilty. If ten people get given free tickets, I’m basically condemning at least 3 of them to an evening of misfortune involve them or their immediate family members.
Or so it seems.

I’ve asked around others in my position, and they said the number of ‘no shows’ is actually closer to 50%. I’m sad to find out that percentage wise, I’m one of the lucky ones!

So, what are the options here? Stop giving away free tickets? I mean, the people who pay almost ALWAYS turn up. The figures of unclaimed tickets for paying customers was less than 2%.

Seems a little mean and a case of the few (or the half) spoiling it for the many (or the other half). My favourite situation is when someone messages to say, ‘we just booked tickets to see your show’. Especially when they are close friends or family members. It shows they value what I’m doing and it means I know they’re going to be there!

So from now on this is what I’m doing:
I’m going to continue to act as I always have done with one exception. I’ll continue to offer free tickets to people when appropriate but, I’ll only ever tell other performers/friends that I’m going to see them once I’ve already bought tickets. Maybe even only after the show. It stops me putting people I know well but not well enough into an awkward position and it shows that I think the show is worth paying for.

If you were one of the few people who I gave a ticket to this year and didn’t turn up and you’re reading this don’t worry, we’re still friends. BUT… at some point during that night I looked out and saw that the seat I saved you was empty and I felt sad.
I probably spent the day worrying about the show a little bit more knowing that you were going to be there. I was excited for you to see what I made and hoped you were going to like it. I made the effort to ask for those tickets and went out of my way for you.
Then, you didn’t turn up.

Some of you didn’t even let me know.
Think about that.