Despite seeing the golf course on the television during the 2014 Ryder Cup, it hadn’t really occurred to me how amazing tonight’s venue was going to be.

I arrived at Gleneagles just before 8.15pm. The car park already full with BMW’s, Range Rovers and one particularly noticeable Lamborghini. As a magician, I’m no stranger to car parks full of luxury vehicles, but the grounds themselves are something special. Gleneagles is a hotel and golf resort comprising of 5 bars, 4 restaurants & 4 golf courses. Since opening in 1924 it’s played host to everything from the Ryder Cup to a G8 summit and tonight it’s the location of a corporate event for a multinational logistics company.

A week prior to tonight Facebook announced the arrival of a message . Billy Reid (www.ReidMagic.com) is a dear friend of mine and a first class magician so I’m always happy to see his name pop up in the corner of my screen. He asked if I was free the following Thursday as a change in his flight plans meant he could not get back to the UK in time for this evening. (The recent busting of an airline company and strikes in France being the source of many recent airborne travel problems in and around the UK) Billy asked if I could cover a performance at Gleneagles for him. I was thrilled to be asked and within 20 minutes all the arrangements had been made. I was happy, Billy was happy and most important, the client was happy.

The requirements of the show were to perform close up magic for 4 tables across 45 minutes, then finish with a 15 minute ‘after dinner style’ cabaret. Admittedly close up magic isn’t generally part of my diary these days but I love magic and still practise avidly. I also perform sleight of hand based magic in my stage show so with no worries of ‘performance cobwebs’ to speak of, I happily put the gig in my diary.

Arriving a couple of hours early I had time to wander the grounds before checking out the interior of the hotel.

The ballroom, although out of use this evening was a particularly spectacular sight. The thing that really caught my attention though were the bathrooms. It’s fair to say that I, along with anyone who’s made a living from performing for longer than 5 minutes will at some point have gotten changed in a toilet. 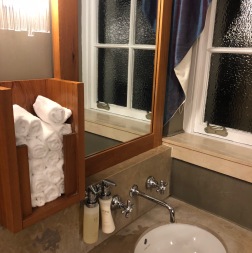 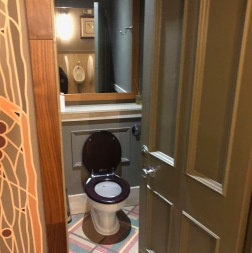 These however were marvellous. Not a broken lock or badly painted door could be found. Each cubicle had a full size door that once closed revealed an almost Tardis like interior. There was a small shelf with scent bottle, a pair of hooks for coats etc, and a double length space to roam around in. Had I booked at the hotel and been given one of these as my room, it’s unlikely I’d have complained. As it goes, I was provided a room in order to get changed but had that not been the case, these would’ve more than done.
Note the rack filled with actual towels with which to dry your hands. Nice.

The show itself was also great fun. The audience came from Scotland, the USA, India and China. Thankfully magic is one of those rare things in entertainment. It isn’t hugely hampered by language barriers or impacted by cultural differences. Everybody laughs when a lemon appears from no where, no matter where they’re from.
After wrapping up the close up magic to an incredible enthusiastic crowd, I knew the ‘after dinner’ part would be fun and to no surprise, it was. A great night had by both me AND the audience. Always my favourite kind of gig.

Handshakes, smiles and thank you’s were followed swiftly as they always are, with the sound of a door closing and the silence in my own car. I set off back down the M80 toward the M6 and home.

Along the way I stopped at Annandale Water Services and was confronted, then surround by some ‘beasts at the threshold’…. (video on instagram)

An hour after this I was home.
Looking back over this evening there’s one thing that stuck out to me.

The wet floor sign is made from wood. I don’t think a big yellow sign would really match the surroundings at this fabulous hotel and so this was a perfect touch. Really I should say ‘another perfect touch’. From the kilt wearing door man and the bagpipe player on arrival to the perfectly black, star filled night sky above the resort (the golf course providing an almost light pollution free canvas upon which the night sky could be framed) everything about this evening was exactly right.

Thanks to Billy for asking me to do this show, thanks to the a client for having me and thanks to Gleneagles for reminding me that perfection is about the little touches.