I really wish I’d written this blog at the time it was actually happening. The problem with only getting round to things 4 or 5 months after they happen is that you forget all of the little things that made a week so fantastic. This week had lots of them and I’ve no chance of remembering them all. So, I’ll endeavour to do my best and just throw in loads of pictures for good measure.
Where, do I begin? Well for once I was travelling with my family on this trip. The opportunity to work at the all new House Of Illusion in Salou came up, and the very charming Rodney James Piper (more on that later) suggested (borderline insisted) that I bring my family and turn it into a holiday too. I thought this was a great idea and so off we went. It was my son Joshua’s first ever time on a flight and between the three of us, we were all pretty excited.
Day one we found ourselves in the apartment provided. A classic Spanish style apartment with a large balcony overlooking the street. We headed straight to the beach and walked around a little to get our bearings. Unfortunately the hot weather didn’t arrive until two days after us but being Spain, it was still pretty warm. The smell of garlic and seafood led us to a small restaurant on the beach. Joshua was delighted with the huge plate of mussels they brought. Sarah and I shared a mixed platter of goodies.
That night we headed down to the House of Illusion as we’d been invited to watch the show. What a show it was! An absolutely incredible cast of hugely talented individuals, coming together to be greater than the sum of their parts. Everyone adds something completely different to the show and the 3 hours flew by in what felt like a heartbeat. Everyone who attends gets as much chicken and chips as they can eat and the alcohol which is also included is never allowed to run dry. It’s an incredible operation and something I would well recommend you checking out if you’e holidaying in Salou.
After the show I was chatting to my soon to be fellow cast members when Glen Bonnar, the HOI’s comedy magician in residence (who is also a terrific close up worker as well as being hilarious) said that he was looking forward to my lecture. This came as quite a surprise to me as I had no idea I was doing one.
Now, in fairness to Rodney, I’m sure this was my fault. All our chats about doing the gig had been via quick texts and emails. Everything was agreed on a verbal handshake and off we went. Somewhere in the jumble I had agreed to lecture and then subsequently had no idea I was doing it.
So there, I was. Once again I’m in a foreign supermarket, desperately searching for things I need for the evening. I love seeing the kind of things on sale in Supermarkets in different countries. There weren’t any Twinkie’s on offer but they did have something else a little interesting…. 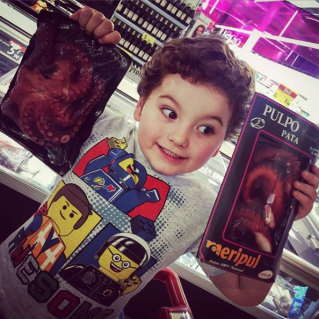 A group message with all of the other magicians was put together and between them and the CarreFour in Tarragona, the lecture was set up. I explained to Rodney that I may only be able to manage about an hour. Three hours into the lecture we were done!
It turned out to be one of my favourite lectures ever.
Quarter of the magicians there were British, three quarters of them were Spanish. As it went Rodney and a local comedy magician translated everything for me and it actually ended up bringing a lot of laughs. Mainly from the fact that I didn’t realise that Catalan & Spanish were different languages. So when I did a trick with a locally bought book, neither I nor my volunteer was able to read it.
The end of the night was a great success. I was absolutely delighted to have pulled things out of the bag and that everyone seemed to be happy. I had a picture taken with the attendees and headed back to the apartment for some well due sleep!
The next day we headed out into Salou again for some more beach action. The weather was looking fantastic and we were well on our way to getting some solid sun tans.
Tonight was to be a big night! My first appearance in the House Of Illusion show. I was doing 20 minutes towards the end of the first half. I headed out on stage to a well warmed audience and did my stuff. It was an absolute blast. From Alex who looks after the tech, to everyone else in the cast, the show is a well oiled rollercoaster that doesn’t slow down from start to finish. What I loved most though was being backstage with the rest of the cast. Talking magic and experiencing that camaraderie that comes from being part of a team.
Friday was soon upon us and I had the night off. We decided to head up to one of Rodney’s other bars as it has entertainment running all night. Also, I was to be performing here myself the next night so I wanted to see where it was. The place is called Chaplin’s.
The acts we saw were terrific and we had a great night as a family. I got stung by every street seller and vendor on the way back as they kept putting toys into my son’s hand and then asking me to pay for them. I didn’t care though, we were all happy and there’s nothing more important than that.
During that day we also headed to Barcelona, a beautiful city that I have visited before. Great food, great fun and another great photograph.
Now comes another day on the beach! Now, when I say a day on the beach I should clarify what this means. My father is ginger and although I myself have brown hair, I have all of those ginger genetics wrapped up inside of me. This means I’m roughly as resistant to the sun as a baby vampire. So for us a day on the beach means Sarah and Joshua in the sun, me sitting under a large shade watching episodes of the West Wing on my iPad. Occasionally I venture out and help build a sand castle but mainly, I watch, smile and take photographs.
Which brings me to my favourite picture from the trip. Right outside the House Of Illusion there is a bridge which shoots water up when you walk over it. Joshua ran across it somewhere in the region of 1000 to 5000 times. On one of those occasions, I took this –
So Saturday rolls around and following yet more beach time we head back to the apartment to get ready for that evening’s show. Sarah and Joshua are coming along to this one, so a few hours after I arrive and set up they get there too. The show was fun and the audience were terrific. This was a full 45 minute show and I was delighted to see some of the House Of Illusion cast who came along to support.
Here’s a shot of me performing my new favourite routine – 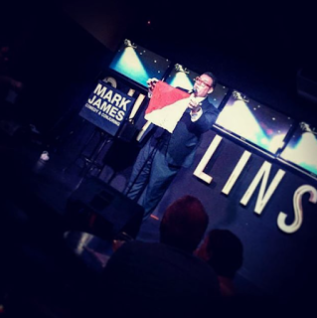 Sunday night I performed at the House Of Illusion to another wonderful audience and more great times.
Monday is our last day of the trip and as the House Of Illusion is closed this evening, Rodney invited us out for an afternoon meal with his wife and son. We had a wonderful time and as our children are of similar ages they both played and argued in equally joyful fashion. It is at this point I come back to Rodney. I have to say I have nothing but admiration and respect for this man. As well as being a stellar performer of mentalism, hypnosis and magic, he is also an extremely versatile businessman. He runs many ventures and venues around Salou and all appear to be doing equally well. The new House Of Illusion is absolutely huge and was no doubt an equally sized risk to take on. I couldn’t be happier to see what a success he’s making of it and that everything is working out well. If I learned anything this week it’s that nothing can overcome passion and conviction. No matter the size of the mountain, if you continue taking steps in the right direction you will eventually reach the summit.
Rodney is a perfect example of that and I thank him for his incredible hospitality, generosity and now friendship.

If you’re in Salou, please go check this place out. I guarantee it’ll be the best night of your holiday and you’ll see a place where real magic exists. 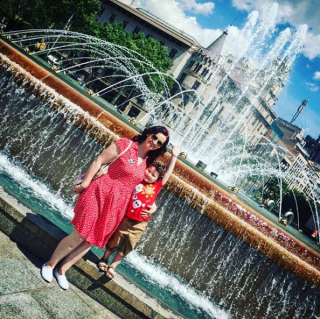 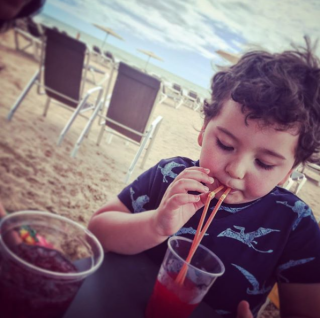 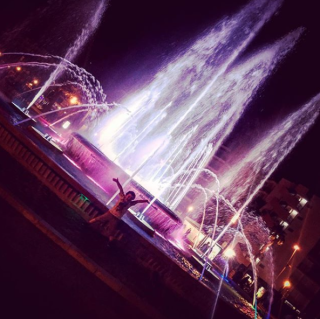